It won't look as cool as this though.

Should I just throw a guitar strap on my boss Bontempi and call it good? Or are there other factors I should consider?

Re: I'm considering constructing a key-tar...

heather wrote:Or are there other factors I should consider?


Besides looking like a total geek?
Don't know if they made it across the ocean (I hope not) but any European will understand when I say Modern Talking... I rest my case
by Flyn
Ben Folds sported one a couple years ago on his first solo tour, and it turns out that without bad hair/music, they're not nearly as embarassing. As for making your own, I have a feeling that weight is of the utmost importance... plus I think they like to put "whammy bar" like controls up there, so you can "shred". Or "something"

Re: I'm considering constructing a key-tar...

For the love of God Liesbeth don’t say that name! Did you know that the more gruesome-looking half of them (D. Bohlen) is back (as juror in the German version of American Idol)? Terrible times.
I just remembered some Austrian musician person saying “The one thing in the music business that has stayed the same since the 1970s – Diether Bohlen was a nuisance then and he still is a nuisance today.”
Very true.

Heather – how about an accordeon instead? That’d be truly geeky.
by meg
This isn't really helpful, but recently I saw a band who played a keytar flat. You wouldn't have known it was a keytar unless you were me, in the front, and a little bored.
by heather
keytars are NOT geeky!


i'm going to make a whole slew of keytars, and prove it. ha!

by carlitos
wait... does that mean Donald Fagen is a geek? Holy crap... Ive been living a lie.

On the "shredding" tip, anyone here ever see Six Finger Satellite live? They really turned their keytar amps *UP*.
by Liesbeth

heather wrote:i'm going to make a whole slew of keytars, and prove it. ha!


you know what would be cool, a double keytar, like the 12-string guitar with double neck kinda thing... I'd be impressed by that!
how to play it I don't know, mind

and what about the melodica? 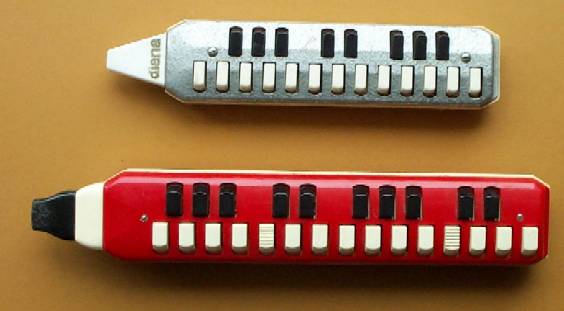 by Dan
Don't mess. My trusty Hohner 901 will destroy all of your insolent keytars.

by sean
when john and i opened for doug yule a couple-few years back, he had not only a homemade guitar, but a homemade mandolin. no word, though, on where he got the mullet and mustache.
by anthropomorphizing_kitty
I'm picturing Heather as that guy in Zoolander who was the former keyboardist for Frankie Goes to Hollywood and was kicked out of the band right before "Relax" and went on to design the first keyboard tie.
by Endo23
In a fabulous film called Safe Men, Sam Rockwell wails on the keytar for a bunch of elderly Scandinavians. Nothing geeky about it.

"We rocked their asses!"
by Harry Kellerman
i think they still make keytars, though most of them are midi controllers.

i, personally, have a mini-synth that has these little metal thuings on the end you can attach a guitar strap too. here, have a look:

if you guys really want i can show you a picture of me playing it, strapped on like a guitar. but i'd hafta charge.
All times are UTC-08:00
Page 1 of 1
Powered by phpBB® Forum Software © phpBB Limited
https://www.phpbb.com/