Man, there is deer all over Iowa City... in town. There is a small wooded area right next to Carver-Hawkeye Arena (where my office is) and I bet I have seen deer in the parking lot 5-10 times in the past few years. Cute, but i don't want to get a hoof to the face.
Top

Just in case any of you were letting the Yuletide season lull you into a sense of complacency about Mother Nature:

"The 13-ft (3.9m) snake was still strangling Ted Dres' body when it was discovered"

I don't know about you, but this is NOT the way I wanna go out...
Top

I remember watching a show on National Geographic having to do with the first post in this thread, where they were suggesting that a snake actually was trying to digest a human. They had pictures of a man wrapped up in the snake's coil--the snake and the human were both dead, and they couldn't say for sure if the man died because of it, but man...that made me cringe.
Top

That story is old, but still good. I hate pigeons. Go pelican! 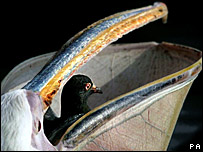 The unusual wildlife spectacle in St James's Park was caught on camera by photographer Cathal McNaughton.
He said the Eastern White pelican had the unfortunate pigeon in its beak for more than 20 minutes before swallowing it whole.
An RSPB spokesman said: "It is almost unheard of for a pelican to eat a bird. Their diet should be strictly fish." [ . . . ] "There was a bit of a struggle for about 20 minutes, with all these people watching. The pelican only opened its mouth a couple of times. Then it managed to get the pigeon to go head first down its throat. It was kicking and flapping the whole way down."
Top

ANOTHER DEVELOPMENT IN THE GIANT SQUID STORY!

Apparently, they "emit blinding flashes of light as they attack their prey..."

The Crocs are back, and this time, it's fricken personal, dude:

The severed lower left arm of a Taiwanese veterinarian is seen in the jaws of a crocodile, Wednesday, April 11, 2007, at the Shoushan Zoo in Kaohsiung, 350 kilometers (217 miles) south west of Taipei, Taiwan. Chang Po-yu's lower left arm was bitten off by the crocodile when he tried to pull a tranquilizer dart from the reptile's body. Two bullets were shot at the crocodile but it was unharmed. Chang went through emergency surgery to have his limb reattached.

Photos for the non-squeamish here.
Top

Rabbit attack!
'Crazed Hare' Attacks Austrian Couple
An elderly Austrian woman required hospital treatment after being attacked by what was described as a 'crazed hare.' Police were forced to shoot the rampaging beast before it could hurt anybody else.
An elderly Austrian couple have been attacked by a "crazed hare."
Traditionally, rabbits and hares are better known as lovers, not fighters. On Monday, however, a hare in Linz, Austria broke the mold, attacking an elderly woman and her husband, not to mention the police officers who were called to the scene.

In a scene eerily reminiscent of the attack of the "most foul, cruel, and bad tempered" rabbit in the cult movie "Monty Python and the Quest for the Holy Grail," the Linz hare assaulted a 74-year-old woman who was hanging laundry in her garden early Monday morning. The animal, described as a "crazed hare" in a statement by Linz police department, bit the woman's foot, causing her to fall.

The unidentified woman, still under attack by the rampant hare, was eventually able to escape into her home, where her husband called the police before going outside to attempt to shoo the bunny away.

When police arrived on the scene, they found the 78-year-old man fighting the hare off with a stick -- and losing. Police asked the man to go inside. When the hare refused to give up the fight, the police were forced to shoot and kill the animal.

Or this: anteater attack!
Top

I suppose they do have "lion" right in the name. yikes.
Top

... called so because yes, they can crack open coconuts with their... bodies??

I'm a little freaked out.
Top

As I mentioned recently on our beneficent architect's web publication, these creatures are suspects in the disappearance of Amelia Earhart and her navigator, Fred Noonan.

More on that here.

When they're younger, they're blue.
Top

43folders is exactly the place where I stole that story from

grant wrote:When they're younger, they're blue.

Wow that is so... still very uncute.
Top

grant wrote:More on that here.

"The joints between individual bones are being attacked and the limb is becoming disarticulated (disconnected)."

I HATE when that happens.
Top

Dizzam, that is messed UP: