To any of you who have seen the music video, does the band packing their things into the van look like the Long Winters to you?
Top

Looks more like Death Cab For Cutie to me -- but there's definitely similarities.
Top

sour29 wrote:Looks more like Death Cab For Cutie to me -- but there's definitely similarities.

I thought the drummer looked more like Nabil but I guess it was just wishful thinking.
Top

PS. Thanks for bringing it to my attention. DCFC has more or less fallen off my radar recently, and that was actually a great video.
Top

I guess in a freeze frame like that it's not as much. Still, that was cool for a minute. Bands should do cameo's in other band's videos all the time.
Top You know, if it wasn't a Death Cab video I think I'd be equally sure it was the Long Winters. 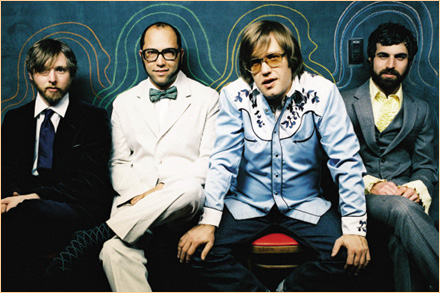 Right?!? I think Jonathan certainly looks enough like cartoon bearded Nick Harmer (I always think of Nick as being clean-shaven anyway.) Eric can pull off a Chris Walla. At some point he had this hairstyle (and was clean-shaven, too, as I recall.) I think the drummer looks as much like Nabil as he does Jason McGerr. Then J-Rod/Ben Gibbard. I don't think of John as having those chops, but nor do I imagine BG having them. The shirt seems classic photoshoot John.

Ha. Never would've thought to compare these bands physically and I'm not sure the comparisons would hold up in real life, but they seem to be (at least minimally) warranted for cartoon versions of them!
Top

would any of the LW talk about a keytar? or Death Cab for that matter
well, maybe in the heat of a forest fire...
Top

In fairness, Jonathan's hair doesn't look anything like Nick Harmer's. That would be odd.
Top
Post Reply
10 posts • Page 1 of 1