Hope for us all

Hope for us all

This is one of the best love stories I've heard in a long time. 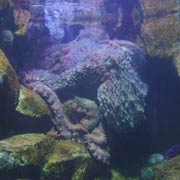 Aging octopus finds love
ANCHORAGE (AP) — It looks like J-1 is in love. After meeting the very fetching and slightly younger Aurora, he changed color and his eight arms became intertwined with hers. Then, the two retreated to a secluded corner to get to know each other better. We're talking about giant Pacific octopuses here.


Love almost passed J-1 by. At 5 years of age and 52 pounds, he's reaching the end of the line for his species, the largest octopus in the world. J-1 is in a period of decline that occurs before octopus die. His skin is eroding. His suckers have divots.

"He's not as strong as he used to be," said aquarist Deanna Trobaugh.

With so little time left, J-1 wasn't going to let the sweet Aurora slip through his eight octopus arms. While she had to make the first move, he caught on quickly, especially for an octopus who was collected on a beach near Seldovia in 1999 when he was about the size of a quarter and has lived the bachelor life since....

Aurora is such an Anna Nicole.
Top

"If with many, many children, Aurora — who was about the size of a grapefruit when she was found in 2002 living inside an old tire in front of the SeaLife Center — will stop eating while she tends her eggs. She will weaken and die soon after they hatch."


Wow...do you think if Anna Nicole got pregnant she would stop eating and then die? Freaky.
Top

Betty Felon wrote:"If with many, many children, Aurora — who was about the size of a grapefruit when she was found in 2002 living inside an old tire in front of the SeaLife Center — will stop eating while she tends her eggs. She will weaken and die soon after they hatch."


Wow...do you think if Anna Nicole got pregnant she would stop eating and then die? Freaky.

I don't think Anna Nicole would stop eating if the only food left was her children.
Top

I was only speaking of the age factor.

And also the publicity/recognition.
Top

disheartening that the older male/younger female thing exists even amongst octopi.
Top

Hahaha....I like to think of it as the female is so mature that she needs an older man who has finally reached the level she is already at. <jk>

Let's not be cynical. I choose to believe that this is true octopi love. It extends beyond age barriers and background differences. Love at first site no less. le sigh...
Top

not be cynical you say?

why? Is cynicism back in style? I knew Irony couldn't last. Did we skip over earnestness completely?
Top

cynicism is the new black. again.

earnestness? don't think it was ever in style.

unless, of course, you're pairing them together.

earnest cynicism. like polka dots w/stripes. you don't think its gonna work, but once you put it on, you're money. so money you don't even know it.
Top

Earnestness in its sweet desperate form reared its head yesterday at my friend's 21st birthday party. It was dotted with a cuteness that made me leave after an hour.

Cynicism it is.
Top

I have never heard a 21st birthday described as "sweet", "desperate", or "cute". Makes me think I want to hear this story.
Top
Post Reply
12 posts • Page 1 of 1

Users browsing this forum: No registered users and 2 guests